The FSEC Energy Research Center at UCF conducts a wide range of research in hydrogen and fuel cell technologies. 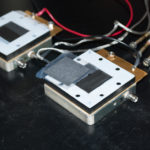 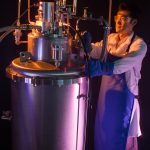 One of the biggest challenges for hydrogen fuel cell-powered vehicles is hydrogen storage. Several major auto manufactures have invested in cryogenic liquid hydrogen storage technologies in which hydrogen is cooled below its boiling temperature of -252.8 °C. Scientific communities worldwide have been actively searching for materials-based hydrogen storage methods due to potentially higher hydrogen gravimetric and volumetric density, moderate pressure and temperature requirements, controllable hydrogen release, easy storage and transportation, and simplified fueling.