Flow batteries are electrochemical storage devices that are a cross between a conventional battery and a fuel cell. Reactant solutions for flow batteries can be stored in tanks, though. A flow battery can scale energy by building larger tanks and storing more solution, therefor they have the potential for grid-scale energy storage solutions.

Electrochemical devices in general are systems that are able to generate a flow of electrons (i.e. electricity) through coupling an oxidation and reduction reaction. Equations (1) to (3) illustrate the oxidation, reduction and net reactions for a nickel-cadmium battery during discharge.

As can be seen for the NiCd battery, electrons are produced at the negative electrode (reaction (1)), and consumed at the positive electrode (reaction (2)). These electrons are transported from one electrode to the other through the electrical path of the unit that the battery is powering (e.g. a cell phone). It can also be seen that the hydroxide ions (OH-) participate in both reactions, but these are transported from the positive to the negative electrode through a separator within the cell. When the two electrodes are connected, current will flow until the reactants are exhausted, at which point the battery is “dead” and must be recharged or discarded.

Flow batteries are electrochemical devices that store energy in the different oxidation states of select elements, including iron (Fe2+, Fe3+), chromium (Cr2+, Cr3+), vanadium (V2+, V3+, VO2+, and VO2+), bromine and hydrogen. Often, these elements are soluble and exist as ions dissolved in an acidic solvent. The principle of operation for flow batteries is identical to that of conventional batteries, where oxidation and reduction reactions at two electrodes enables electron flow. The difference with a flow battery is the manner in which the reactants are stored.

Conventional batteries store the energy as oxidized and reduced species that are incorporated into the electrode itself. As can be seen in the schematic for NiCd batteries, the reactant location is limited to the electrode, and only electrons and hydroxide ions move. When the Cd is oxidized, it remains within the electrode. Since the amount of energy that a battery stores is directly proportional to the amount of reactants (e.g. NiO(OH) and Cd) present in the electrode, longer duration discharges require either larger electrodes, or else new materials that can hold more reactants. Conventional batteries are often characterized by their “specific energy”, which is a measure of how much energy the battery can store for every kilogram of weight. NiCd batteries have specific energies around 50Wh/kg, while lithium ion batteries (Li-ion) are near 200 Wh/kg.

Flow batteries utilize the same structures as every other electrochemical device, namely two electrodes, a separator and an electrolyte. However, the reactants are stored as dissolved ions in a solution, rather than physically incorporated into the electrode. As such, the reactant solutions for flow batteries can be stored in tanks, and then the solutions can be pumped through a cell where the reactions will occur to generate electricity (see the following schematic). In this architecture, the energy is stored as dissolved ions within solution, and the amount of energy for the system depends only on the amount of solution available. Larger tanks will be able to store larger amounts of solution, leading to a longer duration discharge. Meanwhile, the power rating of the device is dictated by the cell-level design, such as flow path and catalyst selection.

The advantage of this design is the inherent flexibility afforded by decoupling energy from power. For conventional batteries, longer duration discharges (i.e. more energy) requires assembling either larger cells or stacking multiple cells together. In contrast, a flow battery can scale energy by building larger tanks and storing more solution. The flow battery approach could have application in grid-scale energy storage solutions, particularly when long duration (>4hrs) is desired. 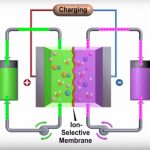 Check out the Pacific Northwest National Laboratory’s animation of how a flow batteries work: https://www.youtube.com/watch?v=lAW-mMsCNlU

For several years, flow battery cells have employed carbon felt as electrodes, but these have been limited to low current density operation, in large part due to the poor convective flow of the solution through the compressed felt. Recently, research groups have been investigating the use of carbon paper as electrodes, since these are relatively incompressible, have good electrical conductivity, and possess high porosity. While performance was observed to increase with the use of carbon paper electrodes, further development was possible.

In order to be viable, however, the stability of the AgBi electrode must be improved. 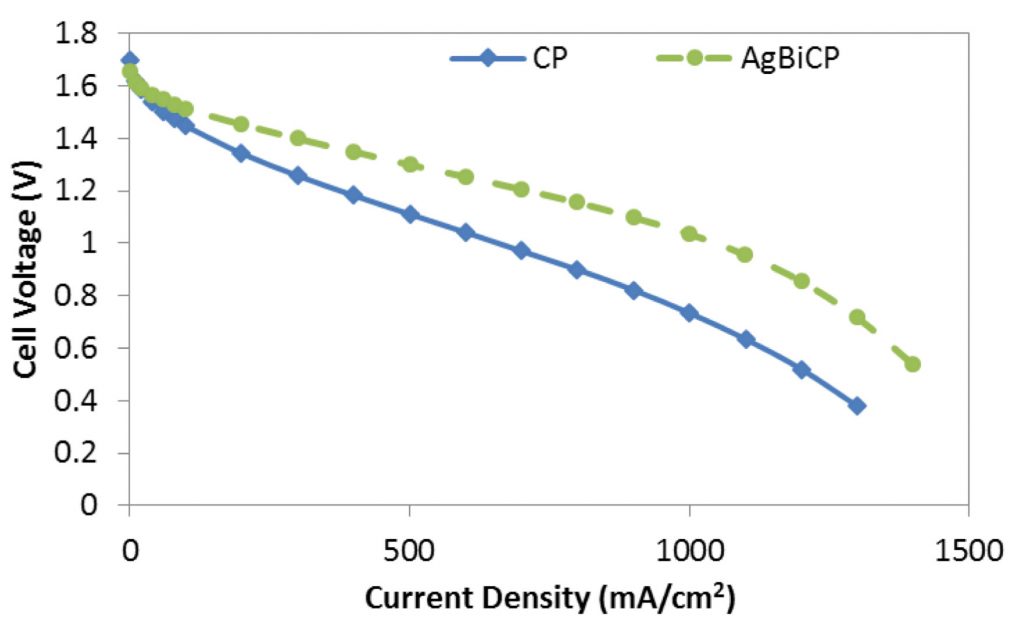