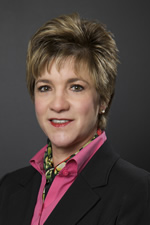 Lynda L. Weatherman, a Florida native, is the president & CEO of the Economic Development Commission of Florida’s Space Coast. In her position, she resides over the operations and strategic direction of a nearly $3 million operation with 15 staff members and 5 outside consultants. Her territory is that of a 1,557 square mile area included within Brevard County, Florida, which includes the MSA of Palm Bay-Melbourne-Titusville.

She is primarily responsible for generating new prospects activity and the retention of existing industry, while keeping abreast of government laws and regulations effecting economic development, all with a goal of creating new jobs for the Brevard County community. She provides advice and counsel to local business and industry and relays new programs and procedures to assist manufacturing and high tech companies. Ms. Weatherman achieves this through trade missions, promoting international trade, assisting industry in their conversion from defense to commercial markets and encouraging investment along the Space Coast.

In 1979, Ms. Weatherman obtained her Bachelor of Arts in Social Sciences/Education from the University of South Florida. Upon graduation, she was a teacher until 1981 when she began her Masters work. In 1983, upon completing her initial Masters program in economic development from the University of Southern Mississippi, she interned at the Florida Department of Commerce’s Bureau of Economic Analysis. She became the Associate Director of Economic
Development at the Gainesville Chamber of Commerce in 1985 and advanced in 1986 to Research and Marketing Director for the Marion County Economic Development Agency.

Weatherman’s work resulted in winning a Rotarian Fellowship to the University of Hong Kong where, in 1990, she completed her second (2nd) Master’s Degree in International and Urban Planning. While in Hong Kong, Ms. Weatherman was an independent contractor for the Hong Kong Trade Fair Group and was responsible for conducting international trade analysis. Upon returning to the United States in 1991, she became the Executive Director of the Space Coast Development Commission and in 1992, became the Executive Director of the City of Titusville’s Economic Development Department. Ms. Weatherman assumed her current position with the EDC of Florida’s Space Coast in August of 1994.
In January of 2009, Weatherman was appointed to serve a three year term on the prestigious board of directors of the Federal Reserve Bank of Atlanta’s Jacksonville Branch, representing this region. In 2007, Ms. Weatherman received the NASA Distinguished Public Service Medal, the highest honor NASA awards to both government and non-government employees. In 2005, she facilitated the first ever Space Act Agreement between Kennedy Space Center and an economic development organization. Ms. Weatherman was also named the 2006 Palm Bay Business Leader of the Year.

In 2010 Weatherman was appointed to Governor-elect Rick Scott’s Economic Development Transition Team. This team is tasked with identifying innovative ideas from the private sector, success stories from other states, cost-saving opportunities and legislative priorities that can assist the Governor-elect. Ms. Weatherman was also tapped to serve on the Department of State Agency Review Team; tasked with reviewing agencies for improvements and reviewing necessary skill sets for workers.