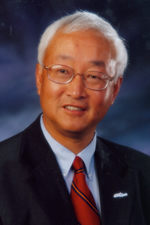 Chu-Tzu Hsu is well-known to colleagues and the community simply as “C.T.”  A native of Taiwan, C.T. graduated from Taiwan’s Tung-Hai University with a Bachelor of Science degree in Architecture and a diploma in Urban Planning. He moved to the U.S. in 1974 to pursue his Master of Architecture in Advanced Studies degree from Massachusetts Institute of Technology in Cambridge, Massachusetts.

In 1984, he established C.T. Hsu + Associates, P.A., one of Central Florida’s leading architectural planning and design firms.  In 2006, the American Institute of Architects (AIA) Florida Association recognized the award-winning firm as its “Firm of the Year” based on its track record for design excellence, service to the profession and community service.

C.T. is a member of the prestigious AIA College of Fellows, an honor awarded to those who have made contributions of national significance to the profession.   He also is a member of the US Green Building Council and has attained accreditation as a Leadership in Energy and Environmental Design (LEED) professional.

In addition to being a talented and international award-winning architect, C.T. is a dedicated community servant. He currently serves on the board of directors for the Central Florida Partnership, the University of Central Florida’s Florida Solar Energy Center Policy Advisory Board, and the SunTrust Bank Central Orange Advisory Board.

He also is an active member of, and held past board positions on, several other business, professional and civic organizations, including the Metro Orlando Economic Development Commission, Visit Orlando, Valencia College Foundation, Goodwill Industries of Central Florida, and Orange County Public Schools Business Advisory Board.

C.T. received two awards for his community leadership in 2005: the Hilliard T. Smith Silver Medal Award from the AIA Florida Association and the Nils M. Schweizer Community Service Award from the AIA Orlando Chapter.  In 2006, the Rotary Club Orlando Chapter named him its Outstanding Businessman of the Year. The Metro Orlando Economic Development Commission (EDC) honored C.T. in 2008 with its prestigious Chairman’s Award which annually recognizes a long-term contributor to the region’s economic development goals.  The same year, the Florida Economic Development Council (FEDC) selected C.T. as its District 6 Volunteer of the Year for his outstanding service and volunteerism in economic development.

C.T. and his wife, Jean, have been married for more than 35 years and have two grown children.