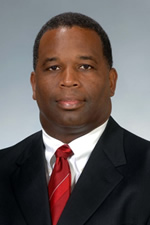 Michael L. Burroughs and his wife, the former Constance Lenora Webster, are both natives of Birmingham, Alabama, and they have one daughter, Genesis Nicole.

As of August 1, 2010, Michael L. Burroughs is the Vice President and Senior Production Officer at Gulf Power, which is a subsidiary of The Southern Company, along with Alabama Power, Mississippi Power and Georgia Power. Previously Michael held the position of Plant Manager at Yates Generating Plant/Georgia Power Company in Newnan, Georgia.

Michael began his Southern Company career at Alabama Power Company in 1991. He started as a Junior Engineer at Plant Barry in Mobile, Alabama. He progressed through various positions until assuming the role of Planning and Engineering Manager at Plant Smith/Gulf Power Company in Panama City, Florida in 1999. During the following 8 years he held the positions of Maintenance Manager as well as Compliance and Engineering Manager. In May 2006, Michael was selected to be the Assistant to the Executive Vice President and Chief Production Officer of Southern Company Generation and Alabama Power Company. In September 2007, Michael was named Plant Manager of Yates Generating Plant.

Michael serves on the Plant Scherer Managing Board and is a member of the Florida Solar Energy Advisory Policy Board.

Michael earned his BS degree in Mechanical Engineering from the University of Alabama – Birmingham in 1990.