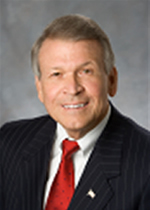 Thomas “Tommy” Boroughs is a Partner in the Orlando office of Holland & Knight, focusing his practice in the areas of zoning and land use regulatory matters together with real estate development, acquisition and sales. He currently serves as the Co-Chair of the firm’s Florida Land Use Team.

In addition to his considerable experience in zoning and land use, he also has extensive experience in various areas of real estate development, as well as transactional aspects of real estate, including purchase and sale negotiations, structuring and financing of complex commercial real estate transactions. Recently, he has focused on energy law with an emphasis upon renewable and alternative energy. Mr. Boroughs has experience in solar pv, solar concentrating power and biomass gassification projects.

Mr. Boroughs served as Chair of the Florida Energy Commission from 2006 to 2008 and served on the Board of Orlando Utilities Commission from 2001 to 2008 (serving as President of the Board from 2004 to 2006). He also chaired the American Public Power Association’s Policy Makers Council in 2005 and 2006 and served as a member of the Board of Directors of the Association. In December 2005, former Governor Jeb Bush appointed Mr. Boroughs to the Florida Energy Forum. In 2007, Florida Governor Charlie Crist appointed Mr. Boroughs to the Governor’s Energy and Climate Action Team. Mr. Boroughs was voted the 2006 Florida Municipal Electric Association Member of the Year.

Between graduation from college and commencement of law school, he served in the U.S. Marine Corps as a Radar Intercept Officer in an F-4 fighter/bomber (Phantom II) and is a veteran of the Vietnam conflict. Mr. Boroughs has practiced law in Central Florida since graduation from law school.